On Monday 7 February 2021, 15-year-old prodigy figure skater Kamila Valieva (the Athlete) participated in the team figure skating event and finished first. One day later, the International Testing Agency imposed on her a provisional suspension: a test taken back in December 2022 of which the results only came on 7 February 2022 showed an Adverse Analytical Finding, and more specifically the existence of the non-specified substance Trimetazidine. This substance is a hormone and metabolic modulator and figures on the WADA Prohibited List.

The widely-known CAS Ad Hoc procedure started after the Russian Anti-Doping Committee Tribunal (ADT) decided to lift the provisional suspension and let the Athlete participate in the other events during the Olympic Games. The IOC, WADA and the International Skating Union (ISU) all decided to appeal this decision before the CAS Ad Hoc Division.

The appeal filed by the IOC, WADA and the ISU and the CAS Ad Hoc proceedings

In rendering its decision, the ADT referred to clause 9.4.3 of the Russian Anti-doping Rules (ADR) which states that a mandatory provisional suspension may be eliminated if the athlete demonstrates that the violation is likely to have involved a contaminated product.

The IOC, WADA and the athlete’s federation (International Skating Union, or ISU) filed an appeal against the ADT Decision to lift the provisional suspension, essentially requesting to annul the decision and declare the athlete ineligible to compete. In its submissions, the ISU supported that there should not be a special standard of proof regarding provisional suspensions for “protected persons” (which includes minor athletes) and that the panel should not apply by analogy the three conditions for granting provisional measures as per the CAS Code (i.e., irreparable harm, balance of interests, and likelihood of success) to a case related to the lifting of a provisional suspension. The respondents included the Athlete, her national Olympic Committee (ROC) and RUSADA.

As in all cases heard by the CAS Ad Hoc Division, a panel was swiftly constituted and held an urgent hearing with all parties involved. In her submissions, the Athlete claimed that contamination was the most likely route of ingestion of the substance. On its side, RUSADA questioned the jurisdiction of the CAS Ad Hoc Division for this case, while ROC stated that the anti-doping rule violation (ADRV) should be lifted because the results came out after the 20-day window stipulated in the rules. Upon hearing the parties, the CAS Panel issued its operative part dismissing the claim and allowing the Athlete to compete.

As a preliminary issue, the Panel upheld its jurisdiction (objected to by RUSADA) because the decision was rendered during the OG, and the dispute was related to the OG (referring to CAS OG 20/06 & CAS OG20/08). More specifically, the legal connection to the OG is established by the fact that the provisional suspension automatically prohibits the athlete from participating in all sports, while the jurisdiction ratione temporis arises from the fact that  the decision was rendered during the jurisdictional window of the Ad Hoc Division. As such, the Panel held that the connecting factor for the CAS Ad Hoc jurisdiction was the dispute itself and not the authority that rendered the appealed decision; it was therefore irrelevant that RUSADA did not act as an authority of the OG or was not listed among the sports authorities of Article 1 of the CAS Ad Hoc Rules. It was further irrelevant that the suspension was not specifically aimed at the participation of the Athlete in the OG.

Notwithstanding the fact that several provisions have different standards of evidence and lower sanctions for protected persons, the WADA Code is silent regarding provisional suspensions imposed on these athletes 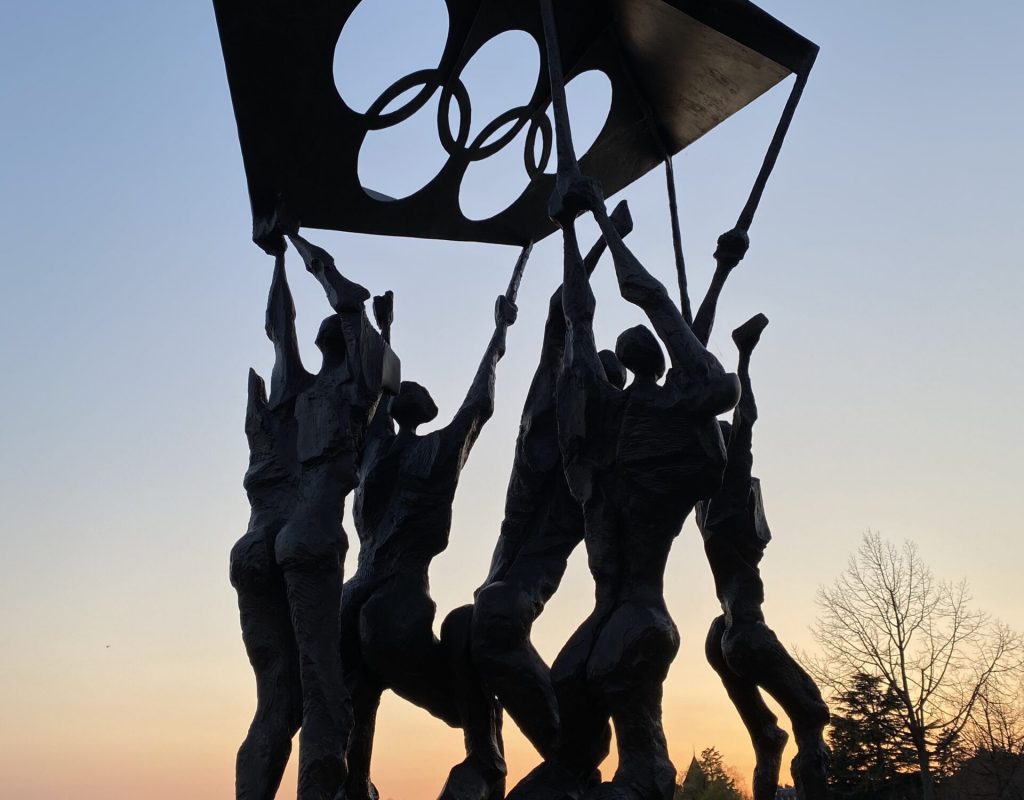 Decision on the provisional suspension

According to the ADR (and the respective provision of the 2021 WADA Code, Article 7.4.1), the provisional suspension (which is “mandatory”) may be eliminated if the violation is likely to have involved a contaminated product and the athlete can establish that the AAF came via the ingestion of such product. The Panel held that “Protected Persons” have a special status in the WADA Code particularly when it comes to assessing fault or negligence and the standard of proof. Notwithstanding the fact that several provisions have different standards of evidence and lower sanctions for these athletes, the Panel acknowledged that the WADA Code is silent regarding provisional suspensions imposed on such Protected Persons.

The Panel went further in its analysis and held that the Athlete (as a Protected Person) would be potentially subject to a minimum possible sanction if she could establish no significant fault or negligence. Even though the WADA Code does not provide for an exemption to the mandatory provisional suspension for a non-specified substance used by a Protected Person (and thus falls within the mandatory provisional suspension), only Protected Persons can potentially receive a reprimand and no period of ineligibility. The Panel held that this different treatment for Protected Persons is “inconsistent with the oft-expressed intent of the Code drafters to make the Code apply more leniently and flexibly to Protected Persons in light of their age and inexperience, and their diminished responsibility for rule violations”.

As a result, the pertinent provisions (Articles 9.4.1 and 9.4.3 of the ADR) should be interpreted by the Panel in line with the rest of the rules: to the extent that the ability to show intention or fault of a minor athlete might be difficult, the sanction is likely to be on the low end of the range and the strict application of the rules related to the provisional suspension would almost certainly lead to a longer provisional suspension period than the one that would eventually be imposed. The Panel therefore filled the lacuna (or “unintended gap”) of the WADA Code and insisted that this is its “interpretation” and not a re-writing of the rules (at 196 and 201). It held that provisional suspensions of protected persons should be evaluated as optional and not mandatory under WADA Code 2021 Article 7.4.2 and its progeny. As an additional argument, the Panel held that the Athlete found herself in this situation without a fault of her own, and she would have been before the CAS Appeals Division (and not the Ad Hoc Division).

Coming back to the issue of provisional suspension, the Panel recalled the conditions of Article 37 of the CASCode as well as Article 14 of the CAS Ad Hoc Rules, which apply to the granting of interim relief, notwithstanding the objections raised by the ISU in this regard (at 90). The three criteria that need to be cumulatively met are the risk of irreparable harm, the balance of interest, and chances of success to the merits). Prior to the specific examination of the three criteria, the Panel generally took into account the length of time for the laboratory to submit its report of an AAF involving the  Athlete, the relatively low level of the prohibited substance, the fact that she had tested negative in multiple tests before and after the test in question, and the likely low level of sanction she will face if found to have committed an Anti-Doping Rule Violation (ADRV).

With respect to the risk of irreparable harm, the Panel confirmed that such risk was present in this case by referring to relevant CAS case law. More specifically, even though the risk of missing a sporting event or a competition is not per se considered to constitute irreparable harm, a suspension that is subsequently found to be unjustified can cause irreparable harm (at 208). Interestingly, the Panel stressed that the Athlete should not bear the consequences of the delay in the processing and notification of the sample and dismissed WADA’s arguments about the “recommendations” of the International Standard for Laboratories (ISL).

The Panel also determined whether the harm that the Athlete would suffer from the provisional suspension would overweigh the inconvenience of the other parties by lifting the provisional suspension. In an argument similar to the one made in determining the risk of irreparable harm, the Panel concluded that the balance of interests test tipped decisively for the Athlete as a Protected Person, to the extent that her chance to compete in the OG could not be replaced with any other competition.

The Panel concluded that all this would have been avoided had the results been notified according to the recommended time limits of WADA and the ISL; a decision would have been rendered before the starting of the OG, stressing the rather extraordinary character of this particular case. At the same time, the Panel recalled the unique facts and circumstances surrounding the case and its limited mandate that would have no impact on the merits and will be decided by another panel through the regular CAS proceedings.

Overall, the Panel rendered a decision on a particular and rather exceptional case, involving a minor athlete (of Russian nationality) and excessive delays in the processing and notification of the sample. Interestingly, the Panel applied by analogy the criteria of provisional measures of Articles R37 CAS Code and 14 Ad Hoc Rules to the issue of provisional suspension of the WADA Code, which is a provision whose conditions are already embedded in the WADA Code and the criteria for its lifting are explicitly provided therein.

It is true that the Panel proceeded to a broad interpretation of the WADA Code in order to confirm the ADT’s decision which reversed the provisional suspension imposed by the ITA. According to WADA, the CAS panel even “decided not to apply the terms of the Code, which does not allow for specific exceptions to be made in relation to mandatory provisional suspensions for ‘protected persons’, including minors”.

However, the Panel’s decision seems to be well justified and considers the specific—and quite extraordinary—circumstances of the case. Most importantly, the wide discretion of the CAS Ad Hoc panels is also enshrined in Article 17 of the Ad Hoc Rules, which explicitly allows the application of general principles of law, making such decision practically impermeable to further challenges. Moreover, the overall spirit of the modifications of the WADA Code is also aimed at granting increased flexibility in the sanctioning of Protected Persons. Finally, one should not lose sight of the fact that the specific decision was limited to the Athlete’s provisional suspension and did not deal with the merits nor with any broader issues arising out of the presence of a prohibited substance in the sample of a minor athlete, such as the investigation of the minor athlete’s entourage and further safeguarding questions.

This website uses cookies to improve your experience while navigating through it. The cookies that are categorized as necessary are stored on your browser and are essential for the working of basic functionalities of the website. We also use third-party cookies that help us analyze and understand how you use this website. These cookies will be stored in your browser only with your consent. You also have the option to opt-out of these cookies. But opting out of some of these cookies may have an effect on your browsing experience.
Necessary Always Enabled
Necessary cookies are absolutely essential for the website to function properly. These cookies ensure basic functionalities and security features of the website and do not store any personal information.
Non-necessary
Any cookies that may not be absolutely necessary for the website to function and are used specifically to collect user personal data via analytics or other embedded contents are characterized as non-necessary cookies. It is mandatory to procure user consent prior to running these cookies on your website.
SAVE & ACCEPT