Brussels Court of Appeal Decision in the matter Doyen et al v. FIFA – Legality of the Arbitration Clause in the FIFA Statutes

Did the Brussels Court of Appeal decide on the compatibility of CAS with the ECHR and European Union Law?

Did the Brussels Court of Appeal decide on the compatibility of CAS with the ECHR and European Union Law?

In 2016, FIFA sanctioned RFC Seraing (the Club) for violating Art. 18ter of the FIFA Regulations on the Status and Transfer of Players (RSTP) that prohibits Third Party Ownership (TPO) agreements. The Club appealed against the FIFA Decisions to the CAS and subsequently filed a motion to set aside the (unfavourable) CAS award1 before the Swiss Federal Tribunal, which dismissed the motion and confirmed the CAS Award, the legality of CAS as an institution and its independence from FIFA (see our note on the SFT judgment 4A_260/2017 here). At the same time, RFC Seraing, Doyen Sports Investments Ltd and other parties filed a claim before the Belgian State Courts against FIFA, UEFA, the Belgian Football Association (URBSFA) and others seeking to authorize Third-Party Ownership (TPO) agreements.

The 2nd Interlocutory Decision of the Brussels Court of Appeal

The 18th Chamber of the Brussels Court of Appeals issued, on August 29, 2018, a (second) interlocutory decision in which it accepted its jurisdictionp2 and considered that it can hear the case to the extent that its effects are limited to the Belgian territory (based on Art. 6 (1) Lugano Convention that provides for the alternative jurisdiction of the seat of one of the defendants in closely connected claims). The Court finally rejected the request for provisional measures filed by Doyen Sports Investments Ltd & RFC Seraing for lack of new elements that would otherwise constitute a change of circumstances likely to question the appreciation of the Court in its judgment of March 10, 2016.

Analysis limited to the compliance of the FIFA arbitration clause with Art. 1681 Code Judiciaire Belge

The Decision did not rule on the compatibility of CAS as an arbitral institution with the ECHR and European Union law, but was limited to the legality, under Belgian law, of an arbitration clause that is not restricted to a specific legal relationship while excluding the jurisdiction of state courts (n. 7, p. 8 of the Decision).  This is a general condition for the validity of an arbitration clause enshrined in Art. 1681 of the Code Judiciaire Belge and said condition is linked to Art. 6(1) ECHR and Art. 47 of the EU Charter on Fundamental Rights (right to a fair trial).

The Court further refused to examine extended arguments raised by the Doyen et al. by reference to the Achméa judgment of the European Court of Justice (C-284/16) trying to establish that the prohibition to have recourse to state course violates the rules on public policy (see 3.1.1 of the decision).

– Concluded that the arbitration clause enshrined in Art. 59(1) FIFA Statutes is too broad to be valid since its scope is not limited to a specific legal relationship.

– Rejected arguments raised by FIFA that the clauses were meant to cover FIFA’s activities and its relationship with its members through its specialized statutes.

– Dismissed equally the argument that disputes covered by the FIFA clause would implicitly cover “sporting disputes” (since the CAS could only accept those disputes) was equally dismissed, since this is not part of the arbitration clause and the CAS is a third party, free to amend its rules at all times irrespective of the FIFA statutes.

– Found that the principle of “favor arbitrandum” is not a general principle that would go so far as to circumvent the specificity of the scope of the arbitration clause.

Therefore, an arbitration clause, even if it involves only two parties, can only cover a specific legal relationship between them and not all possible disputes that might arise in the future between these two parties (paras. 14-16 of the Decision of the Brussels Court of Appeal).

Did the Brussels Court of Appeal reach any conclusions on the “exclusive” jurisdiction of CAS arbitration?

The “exclusive” jurisdiction of CAS included in the FIFA Statutes was merely examined in conjunction with the validity of the arbitration clause that was found to be too broad, and not as a separate matter. Nothing would therefore prevent an association from providing for the exclusive jurisdiction of CAS – or any other arbitral tribunal – to the extent that the other conditions are fulfilled (i.e. scope of the arbitration clause limited to a specific legal relationship).

Did the Court of Appeal conclude on the legality of the Third-Party Ownership (TPO)?

As mentioned above, the interlocutory decision of the Brussels Court of Appeal did not enter into the merits of the case and merely ruled on its jurisdiction. The case is set to continue with a hearing scheduled for October 4, 2018.

The SFT held in its 4A_260/2017 judgment that, based on the principle of national sovereignty, the opinions expressed by the superior courts of an EU member state have no more weight than that of the Swiss supreme judicial authority (4A_260/2017, at 3.4.1).

Most importantly, this finding does not affect the CAS, whose legality as an institution has been confirmed by the aforementioned judgment of the SFT: CAS Panels are called to rule on their jurisdiction based on the Kompetenz-Kompetenz doctrine and on a case-by-case basis.

The findings of this case are also limited to “indirect members” such as RFC Seraing and not to “direct” members of sports federations (which reminds us of the differentiation made before the German Courts in the Wilhelmshaven judgment).

Last, the Swiss courts have not dealt with this specific question related to the arbitration clauses included in the statutes of a sport association.

While the scope of the FIFA arbitration clause has been under scrutiny by many CAS panels to date, there has not been a case where the legality of the clause was questioned as such.

The case is set to continue

In any event, the Belgian Court finding was enough to allow the claim to proceed and dismiss the “exception d’arbitrage” objection filed by FIFA et al based on Belgian law. The Brussels Court of Appeal proceeded to a strict and objective interpretation of the arbitration clause, irrespective of the principle “favor arbitrandum” and the “specificity of sport” that once led the Swiss Federal Tribunal to consider arbitration clauses related to sport (and more specifically doping-related disputes) with a certain “benevolence”.3 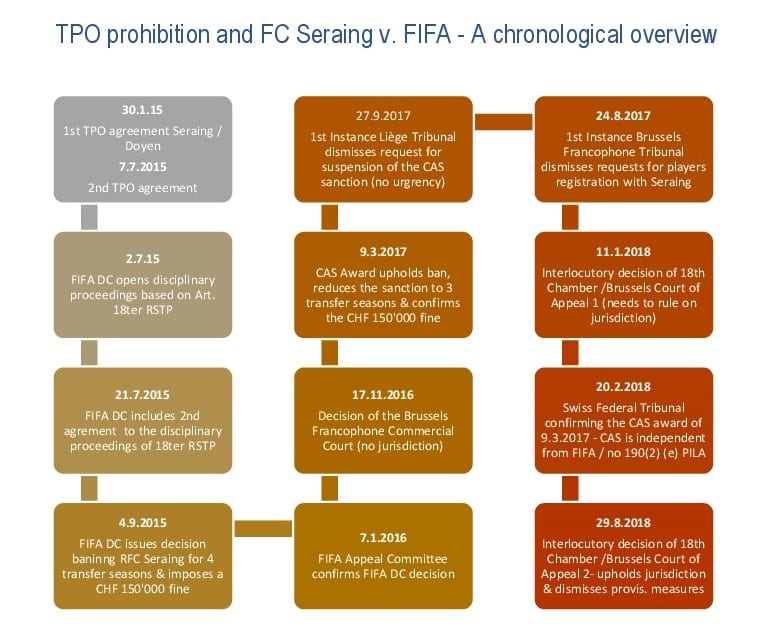